i have the next problem. I copied the Thinger Server IMG to an SD card via using Win32 disk imager…
An normal distribution of wheezy or jessy works with this method… 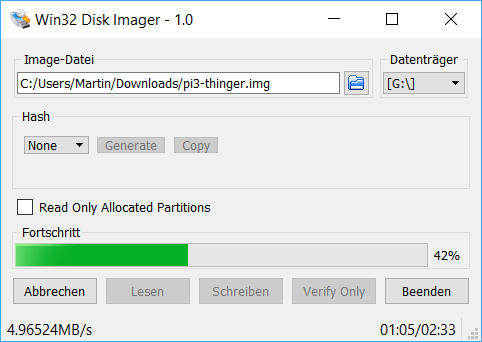 after copy i have 3 partitions on SD card. one is called “system-boot” and one about 600mb and the rest unformated.

Then i put the SD card into the Raspi, plug in the Ethernet, HDMI and power on.

The green LED flashes 2 times and he nothing…

update:
i testet to flash the IMG with the app "Etcher"
now i get an picture while booting. only the “test picture” for some seconds. after that the display went black again… and nothing happens

Hi @WZBFL, are you sure you have a RPI 3? This behavior is common when plugging the SD card in a RPI2.

Which Space for SD card will be nice? How long i can Save Datas on an 8Gb SD Card? Whats your opinion?

8 GB is more than enough to store millions fo data points without problems. Moreover, the Mongodb database in Raspberry Pi has a limitation of 4GB of data storage, as the system is running on 32 bits, although the device supports arm64. So, 8GB SD Card is just fine if you are going to use the RPI only for Thinger.io. It will last several years without problems.

yes of course. Now it Works fine! i bought an Pi3 and it works.
But i dont need the complicate ssh Unbuntu staff. it works without thin cause i already have an DYNDNS Service as well… i think thats the reason!

But i have some thinks to say:
the Platform has some problems with working on IE (Firefox no problems) for example adding some Widgets on Dashboards… nothing happened after config and press “save”…

sometimes i have problems with online status of “slaves” they sleep deep for 5 minutes… they were displayed offline… which timeout do you used for communication…?

Is it possible to use slaves as “actors” with the actual time? for example time shedules… go on at 8am to 11… then off go on at 4pm and wen off at 11pm… simply modified with the Things “inputs” -> coding in arduino…

if you want i try your new source code if you want to test something new??